As you may have read my review about Fallkniven S1, this is my review on Fallkniven Knives which is famous for its fixed blades knives or Survival Knives not only in Sweden but all over the Globe. And it’s the Fallkniven F1 knife which made it most famous as per my research over internet and even talking with few knife experts in my area.

Fällkniven in Swedish language means folding knives and yet it’s famous for its fixed blade knives. Isn’t it strange and happening? Anyways, as we all know Mr. Peter Hjortberger founded Fallkniven and in 1987 he received a request from FMV aka (Swedish Defence Materiel Administration) who need a new survival knife for their Swedish Airforce Pilots? Mr. Peter Hjortberger accepted FMV’s request and started his research for making a survival knife and for that profiling of user and the knife being used is a must.

And he did the same, as per FMV the survival will be used by elite soldiers of Special Forces who are not only highly trained military personnel but also operating behind enemy lines. Keeping in mind the modern warfare and priorities for most above said users. Thus, he designed the first F1 Knife which has short yet broad blade, full tang, a knife well suited for the tasks required and can withstand extreme climates.

The first F1 knives were made with ATS34 which was used in turbines of Boing Jets having same qualities like of VG10. Linder Cutlery took the manufacturing of first 2000 Knives and delivered them. In August 1995 they were delivered and within the same year it became official Survival Knife of Swedish Airforce Pilots.

Fällkniven didn’t want to just cash in the success and they started developing better laminated steel to stay ahead of their competitors and then they came with VG10 lamination which not only adds more flexibility in its steel but also making it more resilient. Then they have Lam Cos and later 3G lamination.

This is the most decisive part in selecting blade material for survival knife as this new VG10 laminations allow the knife to bend and return to its actual true without breaking or staying bent. Further enhancements are done with convex grind of the blades and for that it needs skill and mechanical automation.

Today, more than 100,000 Fallkniven F1 knives have been sold worldwide and as it’s a family business still ran in Boden with 7 family members.

Fallkniven company success lies in continuous development based on feedback from their customers and users. This results in a complete series of Knives like Fallkniven F1 and Fallkniven F1 Pro.  All F1 models have CoS, VG10 and then Super steel called 3G. People on low budget can have CoS and who want really premium steel for their survival blade and Opt for 3G.

Similarly, users asked for less expensive yet a material easy to sharpen you have Fallkniven F1 with Lam CoS steel for them. And those who look for really good performance they can have same knife in VG10 variant of Fallkniven series.

Then comes the blade finish, Satin or black adding more character to your knife. As for Fallkniven F1 Pro versions as per materials it’s been discussed for bigger blade size Fallkniven has F1 Pro it’s for people who want more beefy and more rugged knife. 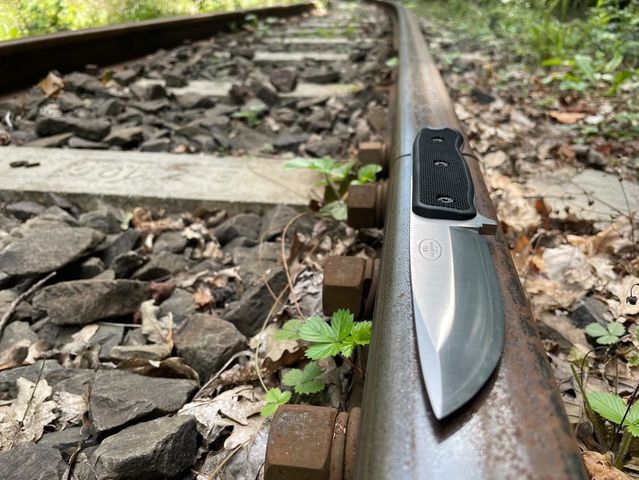 Fallkniven F1 is official knife being used by Swedish Air Force since 1995. 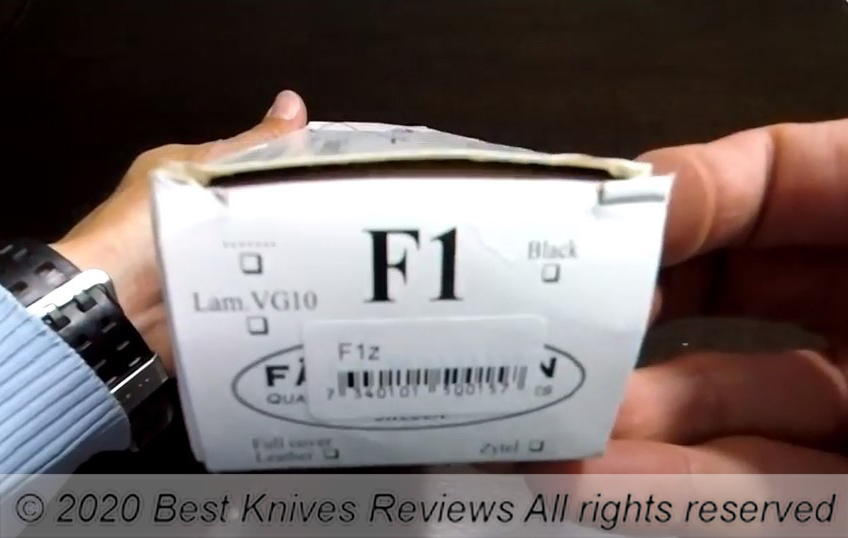 When we talk about Fallkniven Knives, its Survival knives with high quality blade, superb grip at your disposal, similarly, this Fallkniven F1 is definitely a Scandinavian classic as it also has drop point blade, its middle sized blade and a synthetic handle and who can forget about its Zytel sheath which we discuss in detail as well.

As per my first impression of Fallkniven F1 Knife, I must say it’s quite balanced between its strength, functionally, cost and effectiveness which we will be doing in this review as we proceed. But first things first, let’s talk about its Technical Specifications, so we know, what to expect from it and what not?

But, do not get fooled by the dead simple plain looks of this knife. It’s a fixed blade knife and its almost 6 ounces 170 grams meaning as light as holding 3 A4 printing papers in your hand. The Zytel sheath comes by default with it.

But if you order it from Fallkniven official website, you do have the option to have leather sheath as well. Please note that there is another variant of F1 with Lam.Cos also which is slightly higher in price as compared to F1 VG 10 stainless steel knife we have this review on.

Then comes the 3 layers of laminated steel which is not complete convex grind as an whole like Fallkniven F1 Black, but you will find flat grind for most the part and convex grind start to get its shape near edges. Similarly, all 3 layers of steel are visible in day light.

I have tried and used it and after I rate it 7 out of 10 for its Batoning ability. As 3.75 or 4” in F1 Cos Version both are quite small for batoning purposes but yet, the strength of the blade and retaining blade sharpness earns it 7/10 rating against batoning. 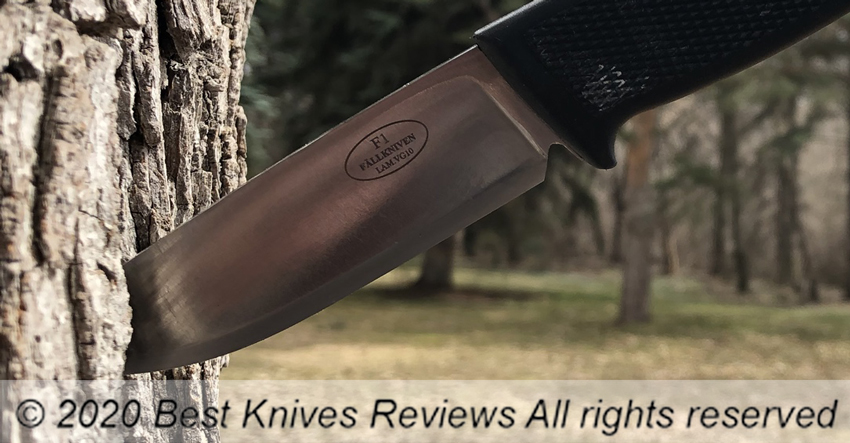 F1 is a full tang knife by design and the handle is again made from Thermorun. Thermorun is a synthetic material and which is insoluble against so many soluble agents.

The handles are thin, so they do not bulge up the grip, making the knife’s grip comfortable in hand. The Thermorun handle scales provides added friction (grip) when your hands are wet or even if you are wearing gloves. 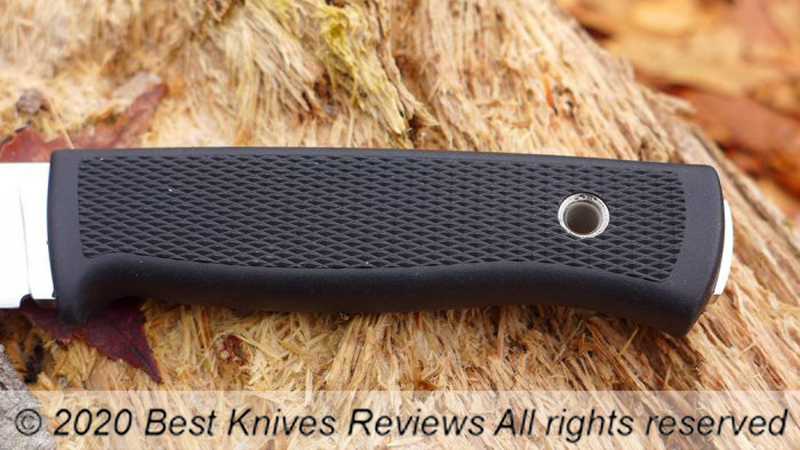 There is also a lanyard hole in the handle as well. Given I never used lanyard in my Fallkniven knives because they are always packed in their respective sheaths. But yes, during batoning having a lanyard for addition grip is a good thing.

The tang of Fallkniven F1 sticks out from the end and servers as hammer or if you have to press or squeeze anything in wild, you can easily use it.

As a whole, the handle from its construction to its materials everything is great, you can use it anyway you want, all types of hands and almost all grips are fine while holding. I must say the handle ergonomics of this knife are better as compared to Fallkniven S1.

Fallkniven F1 is for sale at most the websites with Zytel Sheath through injection molded system. Its light weight, durable and has large belt loop as well. A small lip locks the knife securely but when you shake it, you still feel the noise of blade hitting the sheath.

I must say it’s not that quality or craftsmanship that you see in a knife as these sheaths are mass produced or the one I received wasn’t properly checked for quality. But, there is also a hole in it at the bottom of sheath which serves as drain hole for dirt and fluids.

But, there is leather sheath available as well for this knife, I don’t have my hands on it so, it’s not right to comment on something without using it. 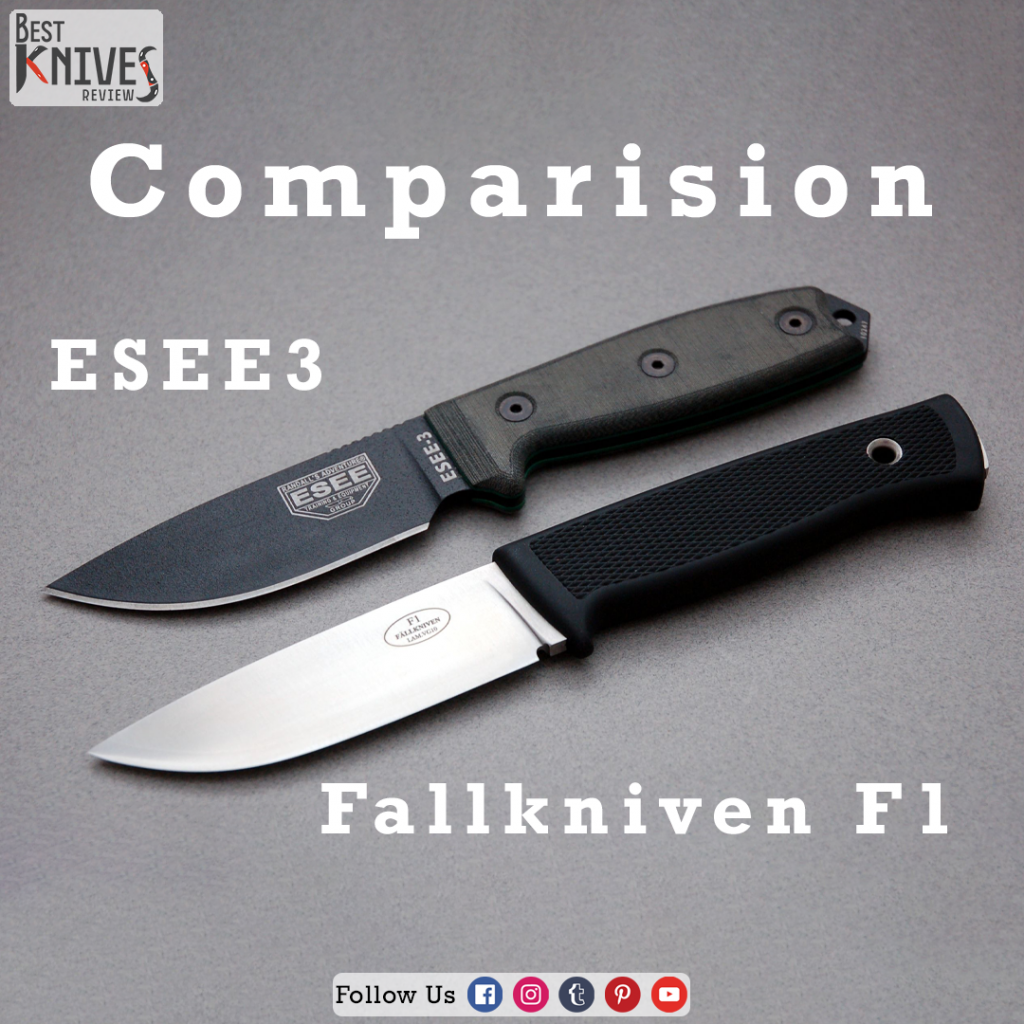 Its time to conclude or sum up my Fallkniven F1 Knife Review. ESEE 3 is great for small utility field tasks because its 1095HC steel tend to bend at times as compared to F1 which is clear winner in terms of its blade material and strength.

Fallkniven F1 holds longer edge retention during batoning because of its convex grind as compared with flat grind. Both (Fallkniven F1 & ESEE 3) are great but when compared against each other, F1 wins for being a multipurpose whereas ESEE 3 more of a side knife is when you have F1 with you.

Note: ESEE 3 and Ontario Rat 3 are almost same and the only difference between them is the price. RAT 3 is a cheaper knife to have as compared with Fallkniven F1 or ESEE-3.

Where to Buy Fallkniven F1 Knife Series for Sale?

Now you know my point of view about Fallkniven F1 Knife. The final question is where to buy Fallkniven F1 fixed blade knives with lowest price, being sure that you get the best price for your knife. I have already listed the products and their overview with key differences above.